Showcasing Early Career Scientists Awards are presented annually by the Cooperative Research Centres Association. The winners at the 2007 conference in Perth were: 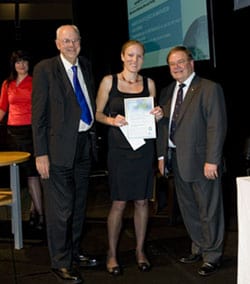 Ms Dianne Mayberry, Getting into the guts of a salty problem

Human health experts may warn against eating excess salt, but if sheep could be successfully grazed on saltbush, the result could be a huge help in solving one of Australia’s worst environmental problems – dryland salinity. With more than a million hectares of severely affected saline land in Western Australia alone, and the area rising steadily, new ways to make this land productive and profitable are eagerly sought.

Over vast areas of salt affected land, saltbush is one of the best plats to produce green feed for livestock to eat. Sheep eat and enjoy it, so if this can be done efficiently, it is a big win for farmers, sheep and the environment. Saltbush is known to be rich in protein, minerals, fibre and vitamins all good things. But sheep grazing saltbush alone tend to lose weight – possibly due to their high salt intake. By investigating how salt and saltbush affect the micro-organisms in the sheep’s gut and the amount of energy produced, scientists should be able to work out why sheep do not grow well on saltbush alone, ultimately improving their production on saline land.

Sheep stomachs act as fermentation chambers that digest very fibrous feed which humans and many other animals could never handle. But fermentation is much less efficient on saltbush, producing less energy on which the sheep can grow. This effect is not due to the amount of salt in the saltbush alone and if the mystery can be solved the result may be increased productivity for the farmer.

If scientists can understand the changes in fermentation that cut efficiency, then they can determine how to restore normal function. This may be as simple as feeding small amounts of a supplementary feed such as barley. If successful, sheep could feed on saltbush to their hearts’ content with farmers knowing they will continue to grow and not lose weight. 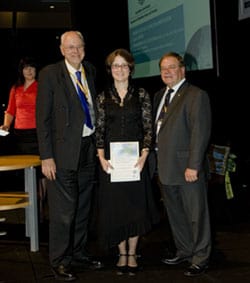 A major challenge faced by farmers and government is predicting the life expectancy of weed seeds in the environment. This is particularly important for weed eradication programs where the weed seed remaining in the soil cannot be seen. Predicting the life of weed seeds in the soil could contribute to reduced uncertainty and cost in weed eradication programs.

Real-time field experiments, in which seeds are buried then recovered to check if they are still alive, are costly and can run up to 100 years. However, by simulating rain events in the laboratory, the CRC for Australian Weed Management found that rainfall might prolong the life expectancy of weed seeds. Three significant weed species common to southeast Queensland: swan plant (Gomphocarpus physocarpus), wild oats (Avena sterilis) and broadleaf privet (Ligustrum lucidum), were used in an experiment to determine dominant weed seed life.

Subsequently, the biochemistry of seed ageing was studied using a novel antioxidant approach developed recently at the Millenium Seed Bank, UK. INterestingly, seeds need antioxidants to stay well, so they are good indicator of seed health.

Existing tests cannot account for all the differences in life expectancy found for species in different soils. A new tool – the Soil-Specific Accelerated Ageing Test (SSAT) – was developed and used to study the effects of soil type and microbe activity on seed longevity. This 3 month laboratory test can simulate the seed ageing that might take over 2 years in the field.

Results from this research could assist policy makers and land managers to better assess weed risks and estimate the required duration of management programs.