Showcasing Early Career Scientists Awards are presented annually by the Cooperative Research Centres Association. The winners at the Pathfinders 2009 The Innovators Conference in Canberra were: 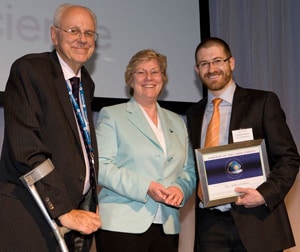 Third generation dentist Nathan Cochrane has made a breakthrough that would have amazed his great grandfather—a way to make decayed tooth enamel re-grow, reversing tooth decay and avoiding the need for fillings.

The treatment works while you sleep by delivering to the affected tooth a powerful solution of calcium, fluoride and phosphate, the building blocks of tooth enamel. The tooth absorbs the solution from a small tray fitted into the mouth overnight.

“The localised application of the mineral treatment re-grows the crystals of the tooth, repairing damaged tooth enamel,” said Dr Cochrane, of the Cooperative Research Centre for Oral Health Science.

“Working as a dentist I see how teeth with fillings in them often weaken” he said. “I wanted to find out whether a chemical process could be used to replace the minerals lost from teeth through decay.”

Working with world renowned tooth remineralisation expert, Professor Eric Reynolds, and colleagues at the CRC, Dr Cochrane discovered that a substance isolated from cow’s milk could be used to stabilise the calcium, phosphate and fluoride ions, allowing them to diffuse into tooth enamel and embed themselves in the crystal lattice.

To prevent saliva from diluting the mineral solution, he developed a small tray that fits over the tooth and focuses the solution on it. The device has been patented.

“Dentists who have patients showing signs of early decay will be able to prescribe the nightly use of the remineralisation treatment for a given period, potentially avoiding treatments such as fillings and extractions,” said Dr Cochrane.

Dr Cochrane’s great-grandfather, an engineer who later trained as a dentist, would have been astounded by the treatment pioneered by the dentist-turned-scientist. 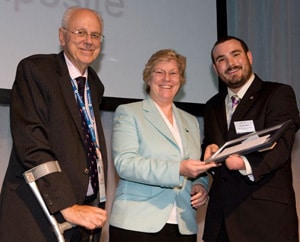 A new technology has been developed to help ensure the structural safety of the next generation of more fuel efficient, less environmentally harmful civil airliners.

Since 2005 much of this has been done with the Cooperative Research Centre for Advanced Composite Structures (CRC-ACS) in Melbourne. CRC-ACS is a world leading research organisation in high-strength lightweight plastics.

The world’s two largest aircraft manufacturers, Boeing, with its Boeing 787 and Airbus Industrie with its Airbus A350, are pouring billions of dollars into the first generation of largely carbon fibre composite structure airliners.

With other innovations, financially stressed airlines are looking at these aircraft delivering increased fuel efficiency of more than 20 per cent.

The new structures are made by placing multiple layers of carbon fibre cloth over a forming tool to produce the required shape, impregnating it with a resin matrix and baking it in an autoclave at high temperature and under several atmospheres pressure.

The resulting lightweight, stronger than steel components produced for the new generation of airliners include the fuselage and cabin pressure vessel, wings and tailplane.

Dr Caleb White and colleagues have developed and demonstrated a technique that they believe can work like a human nervous system and can monitor the structural health of the aircraft during flight. It is an extension of the successful comparative vacuum monitoring system invented in Western Australia that has captured the interest of many international airlines for their metal aircraft.

The system employs vacuum, and any detection of resultant differential pressures, for in-situ, real-time monitoring of crack initiation and/or propagation.

Dr White’s work is aimed at taking the system from use on today’s largely metal airliners to future carbon fibre-based jets.

“Continuous health monitoring is the next step for tomorrow’s aircraft. This has potential to make flying safer and cheaper,” he said.

He has applied his system to aircraft parts made from new composite materials and has developing guidelines for aircraft designers.

Interest in the system has been shown by the European Aeronautic Defence and Space Company, EADS, which has civil airliner builder Airbus Industrie and a wide range of military manufacturers in its portfolio.