Showcasing Early Career Researchers is an annual event on the Cooperative Research Centres (CRC) Association calendar.  Six early career researchers presented their work at the CRC Association conference – Collaborate / Innovate / 2012 – held in Adelaide from 15 to 17 May 2012. Certificates were presented to the finalists by Prof Ian Chubb, Chief Scientist of Australia. 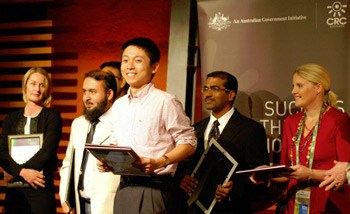 PhD candidate, Mr Fengfeng Li, from the CRC for Infrastructure and Engineering Asset Management (CIEAM) was the Showcasing Early Career Researchers winner.  He is a student at the Queensland University of Technology.

Fengfeng’s presentation was on his research to solve the high-cost problem of maintaining Australia’s aging water pipes; estimated at $10,000 billion dollars over the past 20 years.

Ms Pia Gyldenkaerne presented the results of her PhD research with The HEARing CRC.

Pia’s work measured the ability of children to hear and comprehend in a noisy environment.  Complimentary visual images including lip-reading can assist these children.

Mr Khaja Syed, is undertaking his PhD research at the University of Wollongong with the CRC for Rail Innovation.

Khaja presented his research on the ballast (rocky foundations) on which rails for trains are laid.  The research is directed to finding ways to increased railway safety and reduced cost.

Mr Ruh Ullah is a PhD candidate with the CRC for Contamination Assessment and Remediation of the Environment (CRC CARE) at Curtin University.

Ruh’s research is on the application of nanotechnology for indoor air purification to combat the cost to Australia’s economy, estimated at $12,000 billion a year, which result from illness of office workers.

Ms Fiona Anderson is a PhD student with the CRC for Sheep Industry Innovation.

Fiona used CAT scanning to check 2,000 lambs for muscle, fat and bone.  The result of her study is a new way to breed sheep that have the qualities consumers look for in their meat, for example, leaner lamb chops required by health-conscious meat eaters.

Mr Imran Dhamani undertook his PhD research with the The HEARing CRC.

Imran has developed a new test to distinguish between children with poor listening skills and those with hearing problems.  Some children were found to have difficult “attention-switching” which makes it hard for them to follow a conversation or group discussion.